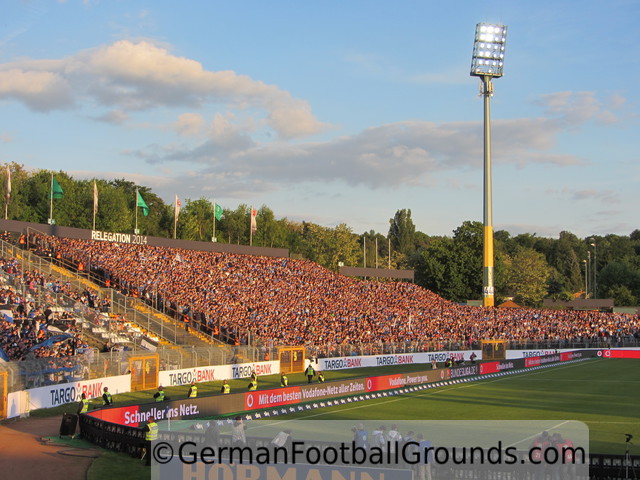 The Merck-Stadion am Böllenfalltor is, at least currently, one of the most charming grounds you can find it in professional German football. Modernizations are currently planned, although their complexity is not yet fully clear.

The ground features a huge main stand that offers covered seating space for 4,000 spectators. Of even bigger proportions is the opposite main stand, a huge terrace which houses Darmstadt supporters as well as visiting supporters on the side. Even though the stadium does not feature a race outer track any more, the oval shape still hints at the previous multi-purpose use of the stadium. Both terraces behind the goals, which are much smaller than the opposite main stand, are curved. In the southern curve, a covered stand out of steel tubes has been built in autumn 2016. Four clasical floodlight pylons are located in the four corners of the ground. Except the main stand and the small stand in the south, no part of the stadium is covered in any way, so better bring an umbrella just in case.

If you come by car, the address of the Merck-Stadion am Böllenfalltor is "Nieder-Ramstädter Straße 170, 64285 Darmstadt".

There is an official cark park for visiting supporters in Eugen-Kogon-Straße, at the technical university. The fee is 3 € and walking time to the stadium is about five to ten minutes. Apart from this, you might be able to find a parking space somewhere in the residential area to the west of Niederramstädter Straße, otherwise on the premises of the technical university to the northeast of the stadium.

The stadium can be reached by tram, although only directly starting from the city centre's Luisenplatz. From the main station, take bus H direction Darmstadt-Kranichstein Kesselhutweg and switch to tram 9 direction Böllenfalltor at Luisenplatz. Leave the tram at the stop Steinberg/Stadion. Travel time is approximately 15 minutes.

Take note that using a matchday or season ticket for the 2014/15 season, you can travel inside the whole RheinMain-Verkehrsverbund (RMV) for free, which includes, for example, Wiesbaden, Mainz, Hanau, Frankfurt and Offenbach.

After the match there are usually express busses towards the city centre, which leave between the middle and northern exits of the parking lot in front of the stadium. For visiting supporters, busses leave just outside the visiting supporter's entrance.

The stadium is about 3 miles away from the main station, so I recommend using public transportation, but if you'd rather fancy a walk, here are directions from the main station which also take you through the city centre, so if you are already there doing some of the little sightseeing possible in Darmstadt you might start with the second paragraph from Luisenplatz.

Leave the main station and head straight onto Mornewegstraße. After about half a mile, you reach a T junction, turn right and take the next left onto Bleichstraße. Follow Bleichstraße for about 700 yards until you reach Mathildenplatz with a park on the left side. Turn right and after about a hundred yards you reach Luisenplatz, the city centre.

From Lusienplatz, head eastwards onto Rheinstraße and Markplatz, leaving the Residenzschloss (castle) on your left hand side. When you reach a big intersection, head straigt onto Landgraf-Georg-Straße/B26. Follow Landgraf-Georg-Straße/B26 for 450 yards, then turn right onto Teichhausstraße/B449. Follow the road, which changes into Niederramstädter Straße after about 400 yards, for a little less than one and a half miles and you will find the stadium to your left.

If you are with the visiting supporters, the only entrance is in the southeast corner of the stadium. If you come from Nieder-Ramstädter Straße with the stadium on your left, continue until you reach Traisaer Straße and then turn left. Follow the road until you see signs which direct you to the entrance ('Gäste' / 'Gästeblock').

Nowadays, the stadium allows for 17,468 spectators. It its usually quite packed, but has not sold out since the last season in the 1. Bundesliga in 2016/7.

Tickets can be obtained via SV Darmstadt 98's online ticket shop. SV Darmstadt 98 does not cooperate with Viagogo, but if a match is sold out you can still try your luck there. 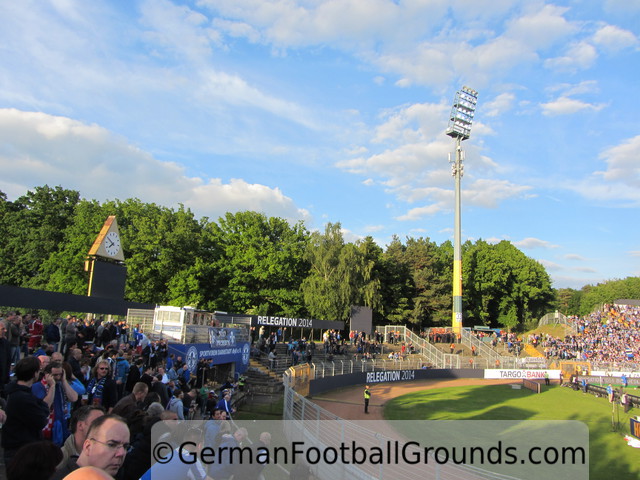 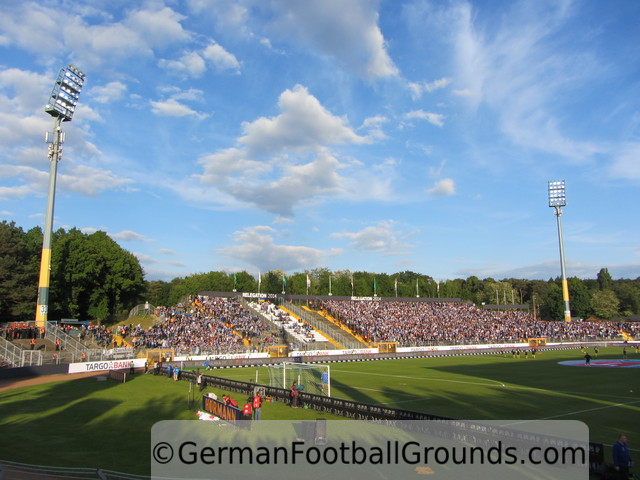 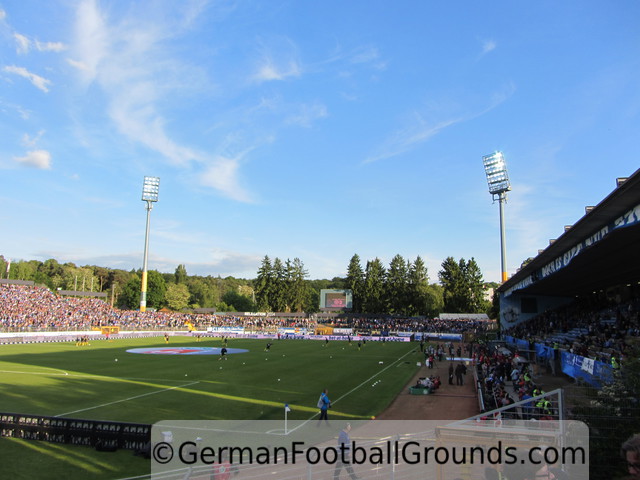 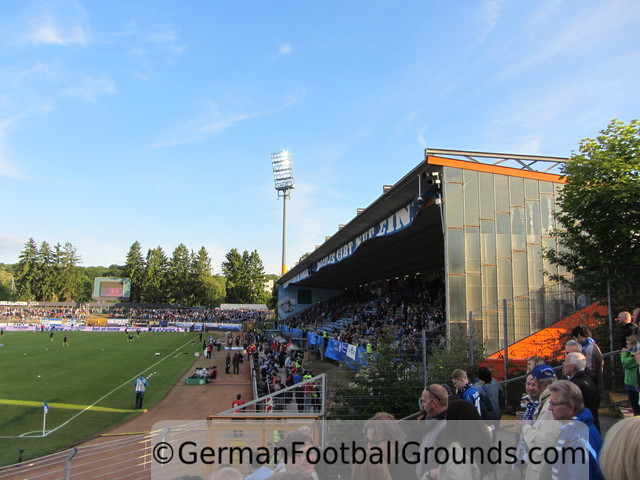 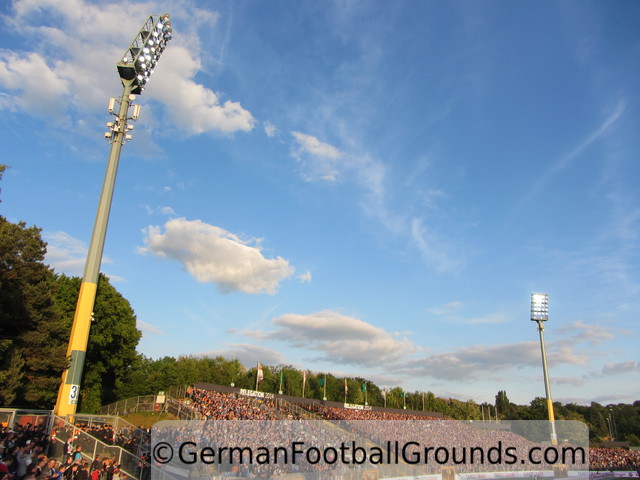 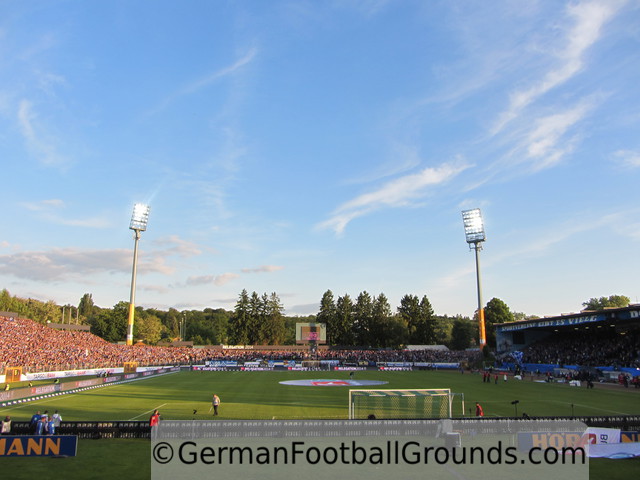 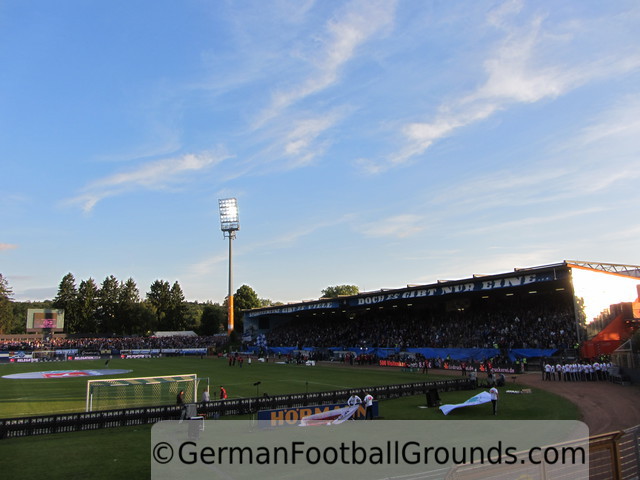 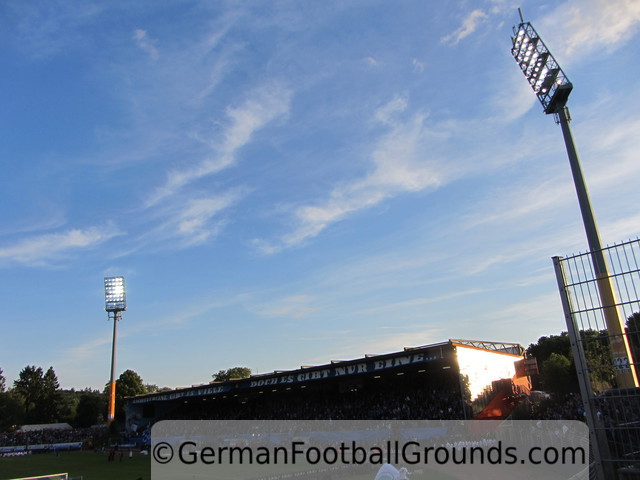 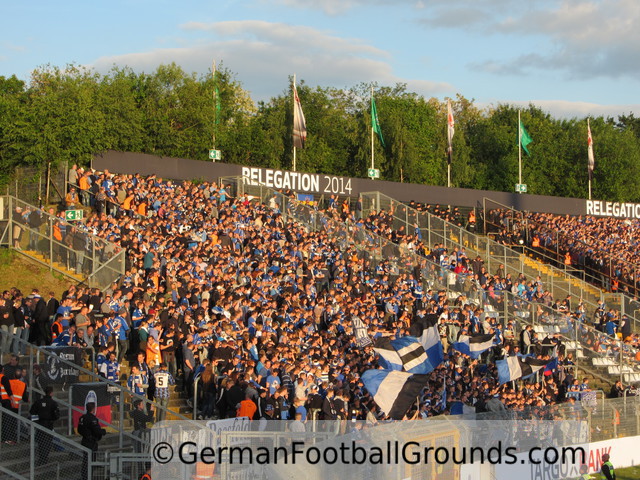 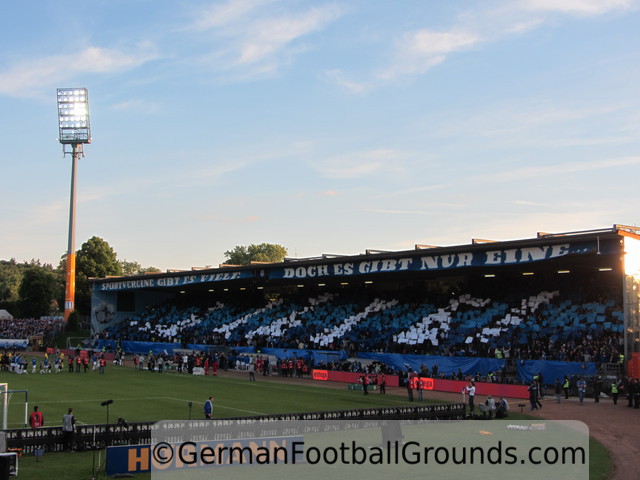