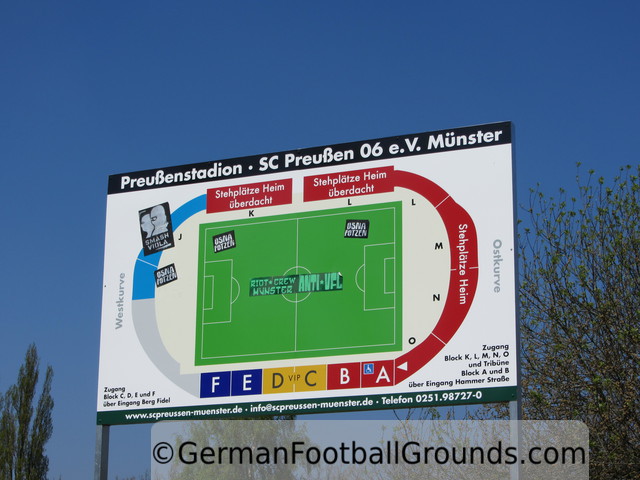 The Preußen-Stadion is a typical example of how football stadiums looked like in Germany before the current "arenas", pure football venues, were built. In addition to this, it was, at the time of its opening, one of the most modern stadiums in Germany and the first one to have a dedicated rail station, Münster-Preußenstadion (which does not exist any more). It was as well the first stadium to ever sell out in the Bundesliga, being sold out for the match Preußen Münster - Hamburger SV on the first match day in the 1963/64 season.

The stadium nowadays offers room for 15,000 spectators, which is, interestingly enough, not due to size limitations but to noise control. By special approval, up to 18,500 specatators might be allowed for games of greater interest. The areas behind the goals are terraced and more or less identical, home supporters are located in the east, visiting supporters in the west. Both stands are curved, due to the race outer track between pitch and stands, and do not offer any protection from the elements. Half of the west stand is currently closed, although renovations have not taken place in this area for quite some time.

The main stand is loacted in the south and flanked by terraces, it offers a roof with a couple of supporting pillars obstructing the view and is seating space only. On the opposite side, in the north, there are two covered, terraced sections, again with a non-cantilevered roof

If this is not an option, just try to find a parking spot somewhere around the stadium, there should be enough opportunities without too much walking involved. This might give you an edge after the game as it can take a long time to leave a parking lot packed to capacity.

From the main station, take any of the bus routes 1, 5 or 9 towards the stop aptly named 'Preußenstadion', which is located directly at the stadium. The bus schedule is available online and the tickets allow free travel on match days to and from the stadium. Travel time is about 12 minutes.

The ground is located quite a bit away from the city centre and the main station, the distance is about 2 miles.

From the main station, take the exit towards the city centre and turn left onto Bahnhofstraße. Walk down the road, with the station on your left hand side. Cross Hafenstraße at the intersection and head straight onto Friedrich-Ebert-Straße. After about 350 yards, there is a small park to your right, follow the road past the park to the next intersection. Follow Friedrich-Ebert-Straße, which means turning left at the intersection, and going south. Follow the road as it turns from a southerly to a southwesterly direction for about three quarters of a mile until you reach a junction with a larger road, Hammer Straße / B54. Cross the road, then turn left and head south again. Head straight on for a bit less than a mile and you will find yourself directly in front of the stadium.

The way from the city centre is about the same distance, but a bit more straightforward. Just find Königstraße, dead in the city's centre, and follow it south as it turns into Ludgeristraße. You will reach a large roundabout, Ludgeriplatz, keep heading the same direction. After the roundabout, the road is called Hammer Straße, just follow it for one and a half miles and you will reach the stadium, which is located on your right hand side.

These are ticket prices for the 2014/15 season in the 3. Liga. Tickets can be bought via VfL Osnabröck's own ticket shop. For matches against Arminia Bielefeld, Hansa Rostock, VfL Osnabrück and Dynamo Dresden, add 10 € for standing places and 2 € for seats.

Preußen Münster draw in a good crowd that seems them in the top ranks of the 3. Liga's average attendance table. As the stadium is big enough, only the odd game is likely to be sold out, for example the derby against VfL Osnabröck.

Tickets can be bought via the club's own ticket shop. 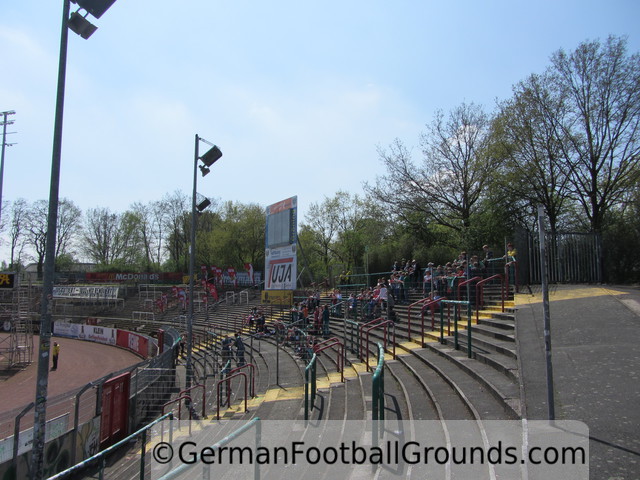 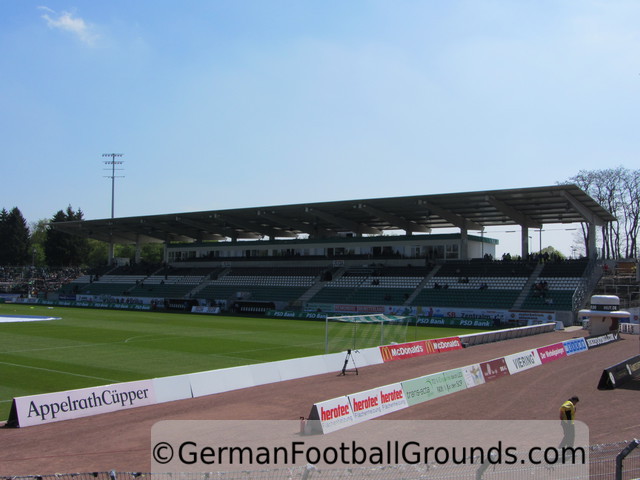 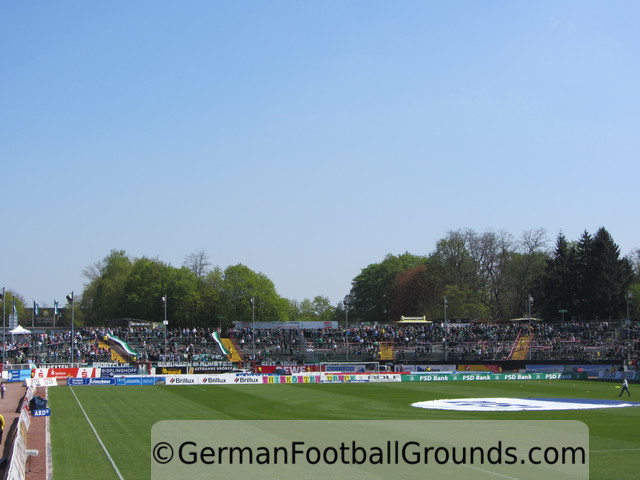 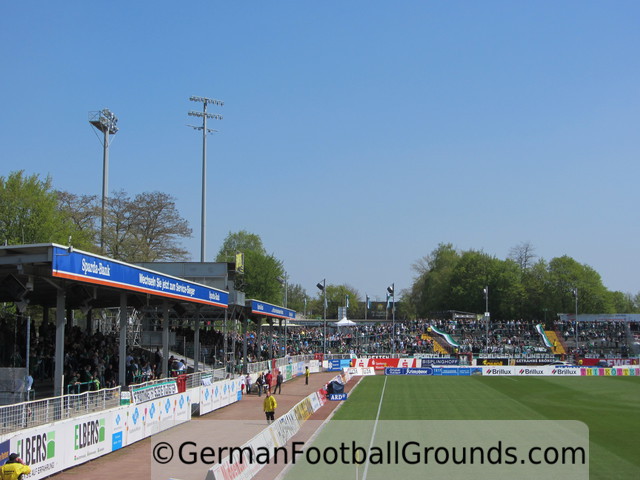 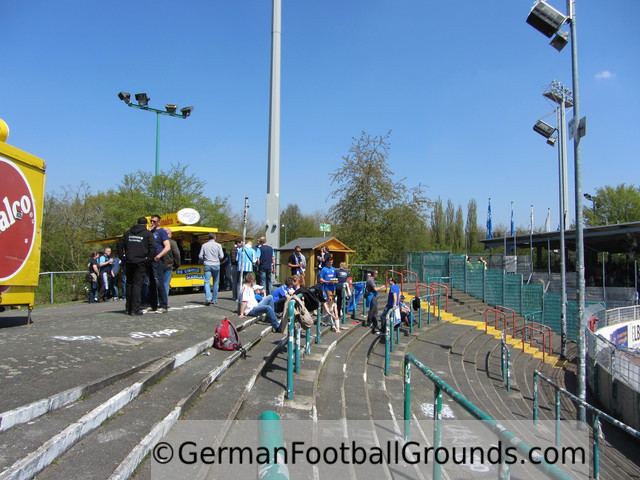 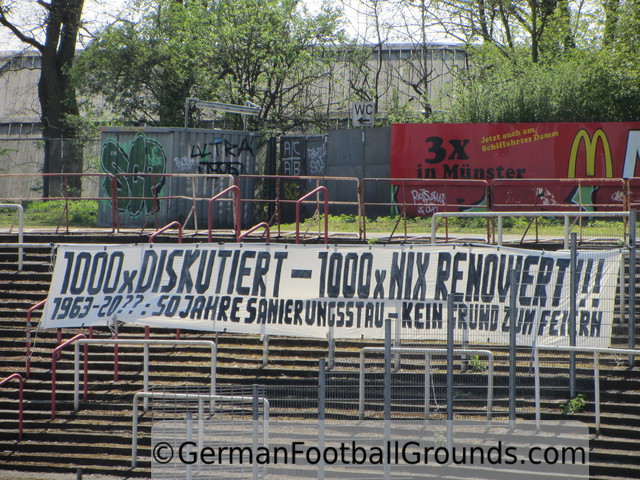 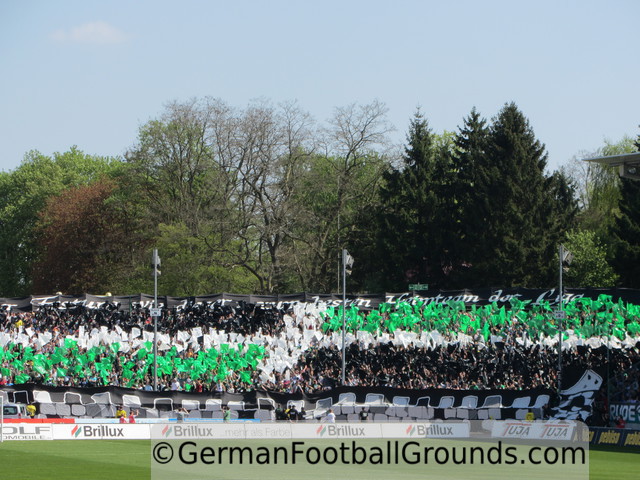