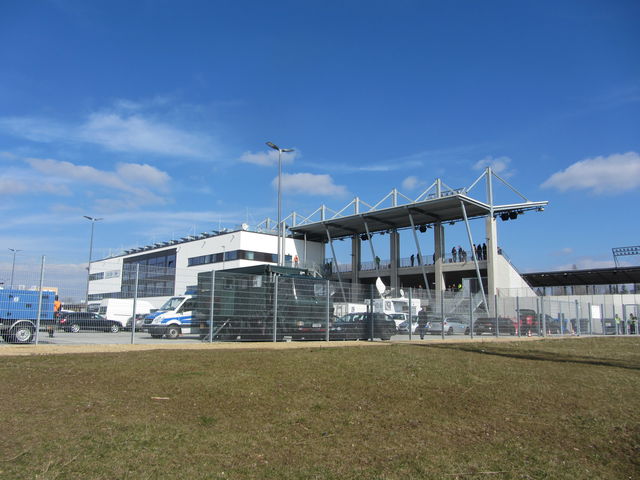 Until 2010, FSV Zwickau played in the historic Westsachsenstadion, a nice venue which would have made for an impressive ground in the 3. Liga, but renovations were canceled due to excessive costs. Starting from the season 2011/12, the club used the Sportforum Sojus 31 as a temporary home ground. This venue was adequate for the Regionalliga (fourth divison), but not very attractive due to its race outer track and the temporary stands.

Zwickau city council took the final decision to build a new stadium in April 2012 and the new stadium's ground-breaking cerenomy took place in February 2015. The stadium was not ready for the start of the 2016/17 season, which Zwickau played in the 3. Liga, so the first game of the season took place in Dresden. The first non-friendly to take place at the stadium was a first round DFB-Pokal (German cup) game against Hamburger SV on August 22nd, 2016.

The ground is located above Zwickau, in the borough of Eckersbach, so you have a nice view over the city from outside the stadium. The stadium itself offers room for roughly 10,000 spectators and consists for four distinct stands with open corners. All stands are covered, but the sides and the back are quite open to wind and rain. All stands are identical in height, but the stands behind the goals are quite small in width. The stands on the sidelines carry two quite impressive floodlight pylons each on the roof. The southeasterly corner is home to a quite impressive scoreboard.

If you come by car, the address of the Stadion Zwickau is "Stadionallee 1, 08066 Zwickau".

If your sat nav does not know this address yet, navigate to the intersection of Albert-Funk-Straße and Max-Planck-Straße.

There are traffic signs for the parking lots around the stadium.

You can reach the ground by tram line 3, stop Eckersbach Mitte. Tram line 3 connects to the Neumarkt and thus offers interconnection to all directions. If you come by train, take tram line 10 from the main station to stop Neumarkt and then change into tram line 3.

For the 2016/17 season, tickets include travel with public transportation from four hours before kick-off until six hours after the final whistle in the area of the VMS (Verkehrsverbund Mittelsachsen) and the Vogtlandbahn

I do not recommend walking to the stadium as it is about three miles away from the city centre, so your best bet is public transportation or a taxi. However, you can find walking directions below if you are so inclined. You can check the route via Google Maps as well.

Exit the main station towards the city centre and head onto Bahnhofstraße. Cross Humboldstraße and the Georgenplatz, continue straight on into Poetenweg and take a half right turn onto Bosestraße. Okay, this may be the point where the walk pays off - follow Bosestraße as it turns into Große Biergasse (Great Beer Alley). Take ramp leading you across the river Zwickauer Mulde, then head along the B93 until you reach an intersection with Scheffelstraße. Head straight on until you can turn right into Makarenkostraße , take a left at the next intersection and then an immediate right and you find yourself directly in front of the stadium.

See the following diagram for FSV Zwickau's price arrangement in the season 2016/17. 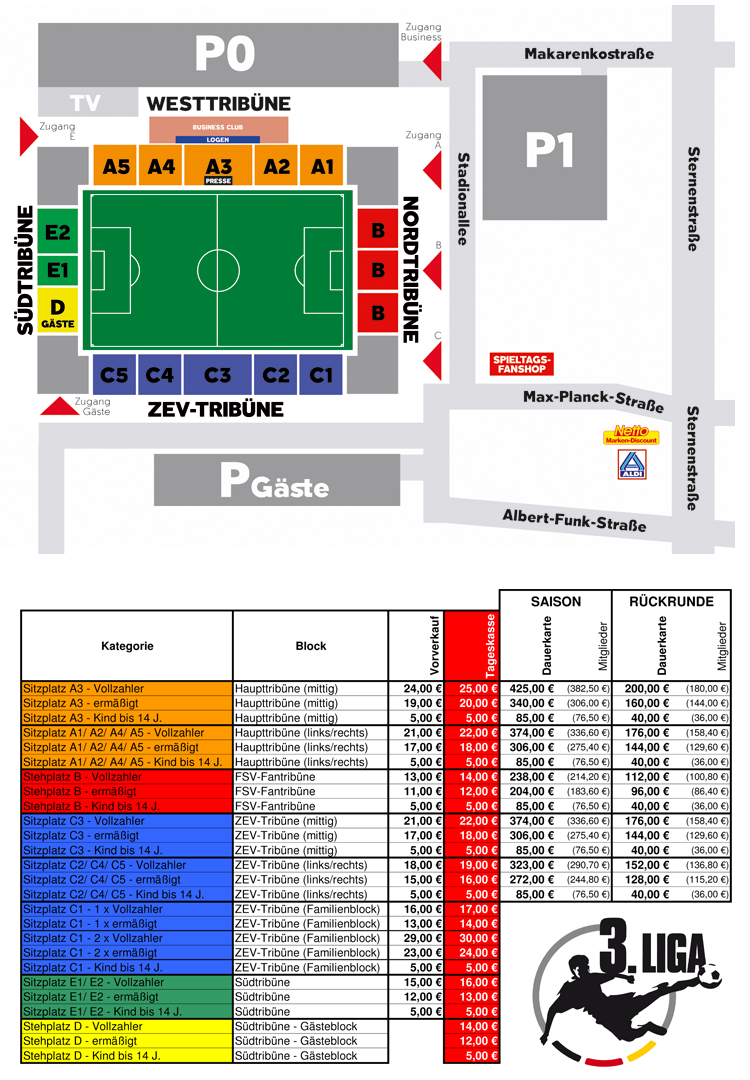 Tickets can be obtained via FSV Zwickau's online ticket shop.

The season 2016/17 is the first season for FSV Zwickau in the 3. Bundesliga. Attendance is quite good, but the stadium has not sold out yet. 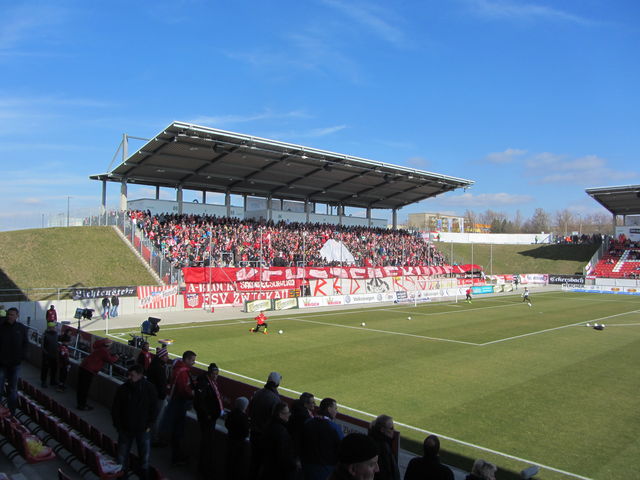 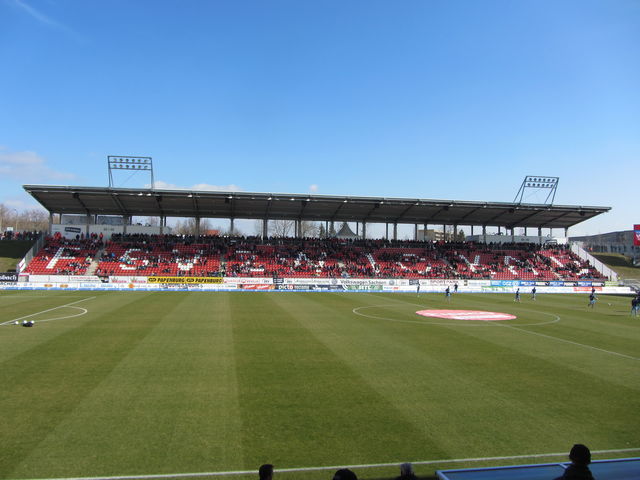 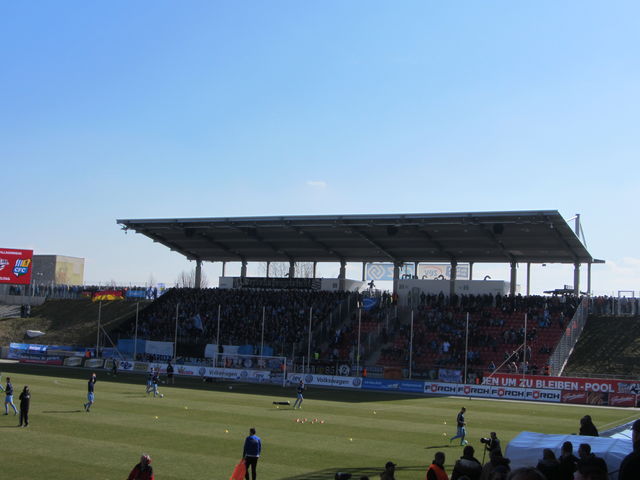 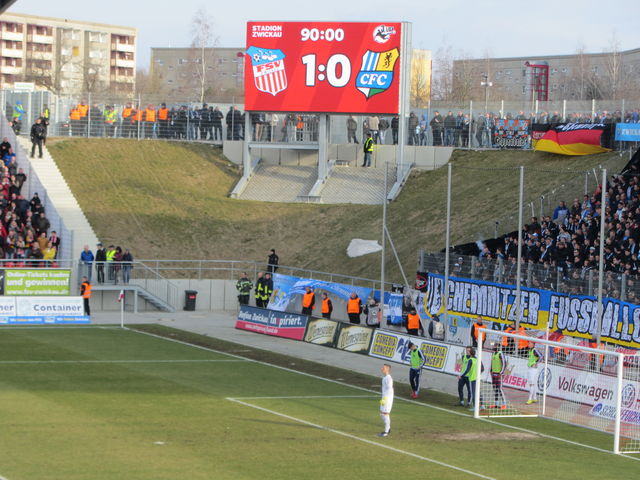